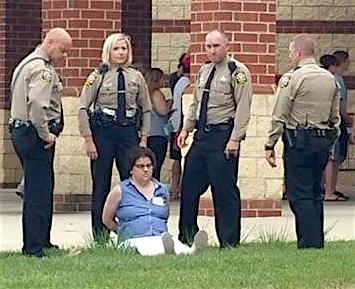 Joy Maloney a School Board Member from Loudoun’s Broad Run District decided at the Trump rally in Ashburn to act like some of the very young children she represents. She blocked the doors to the rally, took pictures of those waiting in line to get into the rally, and threw herself on the ground, refusing to obey the deputy sheriffs’ requests.

When asked by deputy sheriffs to go to the back of the line and stop harassing those in line Maloney refused and sat on the ground.  She refused to get up so the officers were forced to drag her out of the way to the cheers of those protesting the Trump rally. (Many of us have had similar experiences with toddlers who throw themselves on the ground in protest and refuse to move.)

Maloney was charged with trespassing  and later released on $1,000 bond.

This was an elected official trying to deny voters the right to hear a candidate speak. It is their right to get informed for November’s election and she was denying them that right. She should NEVER be an elected official.  How embarrassing for those who live in the Broad Run district and have her representing them.

Ms. Maloney and I both represent the Broad Run district. This is disappointing and embarrassing for our community. There is nothing wrong with protesting a candidate, but she attempted to prevent others from engaging in free speech at this event by heckling them and blocking their way. Worse, when she was confronted by law enforcement, she refused to cooperate with Loudoun’s officers. She even sat on the ground to stop them from doing their jobs. She should be setting an example for our district’s children, some of whom unfortunately were there to watch this happen. Broad Run deserves better.

More on the arrest here and here.

More on the Trump rally here.

[…] in the trespassing case against School Board member Joy Maloney.  We previously posted on the case here and here.  Maloney was charged with misdemeanor trespassing after her attempts to block the door […]

The more exposure “useful idiots” get in the media, the better for our side.
One reason I always look forward to an Al Sharpton interview.

I guess dignity is not a requirement for service on the Loudoun County School Board.

No, dignity and respect for the law are not required to be elected in Loudoun.

I did. What a disgraceful, fat, slovenly, stupid, Marxist pig.

So did they handcuff the crying baby as well?

In the mind, and I use that advisedly, of the socialist, the end always justifies the means. She is obviously a social justice tyrant (SJT).

Wait, she wasn’t for Cruz?

Time to get this woman away from students and public education that we pay for.

Being Loud in Loudoun

It’s not refreshing to see that someone like this is writing the policies for our children’s schools.

Democrat temper tantrum by baby huey, effective, not so much. Will our school superintendent take action? Of course not. Another in a long line of spendaholics protecting their own even when the conduct is unbecoming.

It’s disgusting and embarrassing that Loudoun county has an elected official who behaves this way!

Let’s recognize the act for what it was … the First Amendment under assault.

Good point! That’s exactly what it was.

Multiple assaults involved – speech and assembly. She also endangered public safety by blocking an entrance/exit. Lastly, she damaged school property. It is unlikely that the grass compressed under such weight will ever recovery.

Is there a removal mechanism (impeachment?) for LC school board members? If so lets get it started.

I am trying to find out. I have sent emails to Loudoun officials.

Voters can partition for recall. You need 10% of those who voted in the race to sign a form for recall and the courts must hear the case. Va code 23 on elections

The arrogance! I wonder if she’ll bully Democrat voters for going to hear the great Secretary of Corruption? Voters didn’t elect her to tell them what to think. She wasn’t elected to be a dictator.

Common Democrat attitude. Think as I do or else….