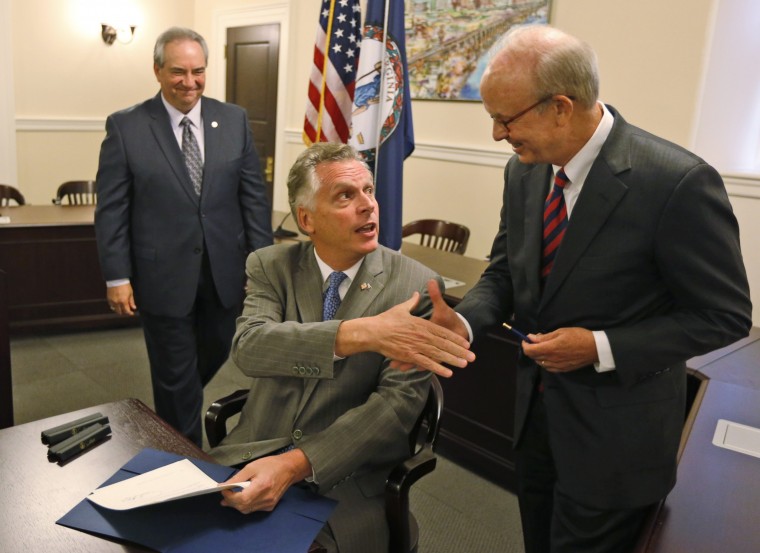 Now we know why Governor McAuliffe vetoed funding for an independent committee on ethics reform in Virginia government and decided instead to appoint his own ethics advisory board. His 10 member board is co-chaired by (almost) Republican Bill Bolling and former Congressman, Democrat Rick Boucher. The board was ostensibly formed to recommend changes to Virginia’s ethics laws in the wake of Governor Bob McDonnell’s arrest and conviction.[read_more]Governor McAuliffe also said sometime in the future he would like the board to make recommendations for non-partisan redistricting of the state’s legislative districts. Now we learn the redistricting issue has moved to the forefront of the ethics board’s agenda.

A few weeks ago a panel of three judges ruled 2 to 1 that Black voters were unfairly packed into Congressman Bobby Scott’s 3rd district. They ordered the General Assembly to more fairly redistrict the state’s 11 Congressional districts by April 1. Not long after the ruling some General Assembly members told The Bull Elephant that McAuliffe would veto any redistricting plan that came from the Republican dominated Assembly. So who will decide how the state is redistricted? McAuliffe answered that question when he said the judges’ ruling

More details on the story here.

“The so called ‘ethics panel’ will be focused on redistricting. Judges ordered the General Assembly to develop a plan for redistricting but it appears the job will fall to a 10 member group appointed by Governor McAuliffe to work on state ethics reform.”