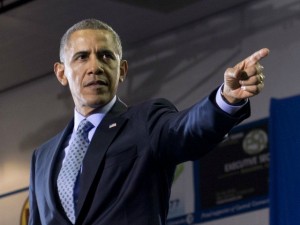 Tonight, December 6th, 2015, the President of the United States of America, Barack Obama, in response to the first Islamic State inspired terror attack on American soil, spent twenty minutes lecturing the American People on what it means to be an American and threatening further controls against our second amendment rights. What’s more dangerous? The homicidal death-worshiping disciples practicing a 7th century interpretation of a 6th century religion, or a 21st century President threatening to take all of us back to an 18th century brand of tyranny?

This is a President that refuses to attack our enemies because he believes that attacking them feeds into their narrative that they are war with us. This, despite that fact that Sunni and Shi’ite caliphates have declared war on Israel and America. He tells us that we must call the Islamic State “ISIL”, because it bothers them. If we really want to hurt their feelings, we’re to call them Daesh. Islamic State soldiers are beheading people, crucifying people, burning people alive, raping pre-teen girls and boys, teenagers, and women, and throwing homosexuals from building tops. Earlier this week they inspired a woman and her husband to slaughter 14 Americans. Our response? Let’s call them ISIL! Let’s call them Daesh! Let’s go to a Climate Change conference.

This president is using the death of innocent Americans at the hands of Islamist terrorists to deprive us of our liberty and to take greater control over our lives. Mark Levin says that we are living in a post-Constitutional America. Levin misses the mark. We’re living in a post-American America. We’re either living in Barack Obama’s nation or we’re living in an American nation – but we can’t be living in both. The two are opposite, contradictory, at war. No President has done so much to destroy our American way of life. I look to The People’s representatives in our United States Congress to condemn this President and to vow to fight any further efforts of this pretend emperor against our American Liberty.

Always easier to fulminate about Obama being unAmerican than to confront reality. http://www.slate.com/articles/news_and_politics/war_stories/2015/12/president_obama_sunday_night_speech_offered_an_honest_assessment_of_how.html

If you really believe one man has accomplished this on his own between golf outings, hanging out at Hollywood events and trips overseas to ceremonial do nothing conferences then more then Barack Obama is delusional. I would provide a common sense list of his enablers but I realize I too often write over lengthy comments. Here is just three reality setting reminders for all from Obama’s 2012 winning RE-ELLECTION – 65,915,796 million votes (58.2% voter turnout), 51.1% of total vote, 332 of 538 electoral college (270 required to win). To rant solely at Obama, as is the current trend among conservative media and bloggers for our deplorable state is a little like bitching at your window shield wipers when your car won’t start. Generally people don’t like doom and gloom but to be clueless, trust me, is much worse, and will certainly elevated your victimhood potential. You don’t remove a tree by trimming a few leaves you need to dig out the root system something we just can’t seem to intellectually assimilate.

We didn’t give the voters adequate alternatives or failed to articulate and educate about their adequacy.

The presidency, like other enterprises of all sorts, are considerably more than just the figurehead.

Just as Rome didn’t fall in a day, they’ve been working on dissembling America for quite some time now.

Keep your eye on how they are gaming the electoral college even now.

Best advice for all is to start paying attention, keep your eyes and ears open, join and get active in an actual political party (GOP is only port in the storm), prepare, practice, prevent.

“This president is using the death of innocent Americans at the hands of Islamist terrorists to deprive us of our liberty and to take greater control over our lives.”

Did you write this after 9/11? PATRIOT Act? Iraq War? Warrantless NSA wiretaps?

Is it true now? Was it true then? What does Reason dictate about the quote you mentioned above?

Buckle up, it is going to be a bumpy year.

The Washington Post agrees, the speech was not about Obama’s policy toward ISIS but a lecture on tolerance and gun control. https://www.washingtonpost.com/news/the-fix/wp/2015/12/06/president-obamas-oval-office-address-on-isis-was-about-tolerance-not-policy/?hpid=hp_rhp-top-table-main_obama-8pm%3Ahomepage%2Fstory

Mr. Tucker, there is Valium; though in your case electro-shock seems more appropriate.

WE ARE AT WAR!

Leave a Reply to The Reasonable Man Cancel Reply