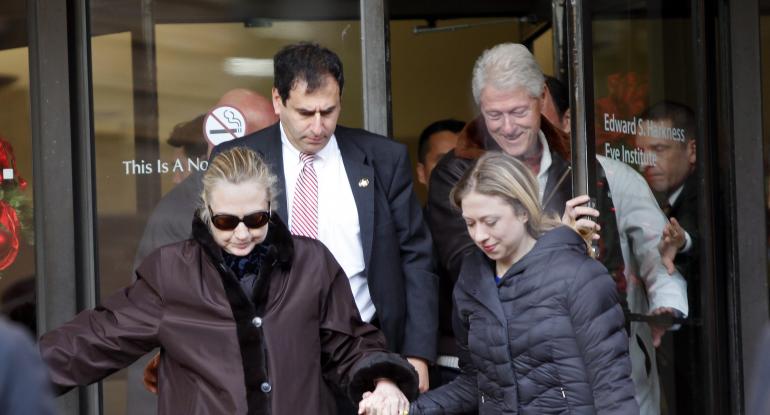 Parenting writer Megan Fox believes it’s time for Chelsea Clinton to intervene and help her elderly Mother who is clearly suffering from various illnesses. Her mother collapsed on Sunday and no one insisted that she go to a hospital! Â Bill Clinton has said in an interview (later edited) that these episodes happen frequently! Â Megan Fox thinks the Clinton’s daughter needs to take action.

What the heck is wrong with her daughter, Chelsea, that she is not stepping in and telling her mom, the campaign, and the entire political world that her mother is sick and that she should not be put through all of this? Chelsea’s just a few years younger than me, with children of her own. While our financial and social positions are light years apart, Chelsea and I are in the same boat when it comes to having older parentsÂ with clear health problems and finding ourselves in that transition period where we start becoming caregivers to the peopleÂ in our lives who once gave such good care to us.

It’s difficult when we have to take care of elderly parents and tell them things they don’t want to hear. Â Has that time come for Chelsea? Â Is it time she stood up and told her parents that her mother is ailing and should not be put through the strenuous campaign that is required for Presidential candidates? Â And the grueling job of President? Â It seems unlikely that Hillary’s health is going to allow her to do the job of President.
More from Megan Fox,

I get why all the political operatives aren’t saying anything and are blindly ignoring the ugly truth about Hillary’s collapsing health: it was her turn to be the nominee and the nominee she now is and their finances and futures depend on her staying in this race.Â I get why the media is working overtime to cover up events like this bizarre collapse of hers in New York: ideologically and emotionally most reporters are committed to dragging Hillary across the finish line however they can.Â I get why all the people who donated to her campaign need her to keep going: they expect a return on their investment, like the nights in the Lincoln BedroomÂ they had the first time theÂ Clintons lived on Pennsylvania Avenue.

But I don’t get why Chelsea says nothing, watching her mom’s body give out on her in such a spectacularly degrading and demeaning way while cell phone cameras capture it all. That woman in the blue pantsuit losing her shoe in public is not just a presidential candidate or a gravy train for Chelsea: that is HER MOM.

Where is Chelsea’s compassion and love for her mom? Not her mother’s ambitions. Not her family’s quest to retake the White House they seem to feel belongs to them. Not her political party’s hunger for power.Â Where is Chelsea Clinton’s basic, primal, human need for her mom to be healthy, safe, and okay? Why isn’t she demanding her mom get the care she so obviously needs?

Several POTUS were able to hide their illnesses and had their family member run the country behind closed doors, do you really think that Chelsea wouldn’t want to run the country given the opportunity? Greed and power is in their blood. So funny to read that someone thinks the Clintons are human.

It takes a coven.

So you really believe the Clinton BS?

I’m a good deal older than Hillary and have some health issues but I’m not about to put my sons or daughter in charge and cannot imagine ever doing so.

Parents don’t ‘put’ their children in charge. Children take over their parents care when they feel it’s necessary, most often because the parents are ignoring their health issues, like refusing to do to the hospital when necessary as in the case of Hillary. Or driving when they are clearly impaired, things like that. Parents NEVER want to put their children in charge but at some point the children realized it’s necessary and step in to help.

Read the link to the article I posted. The author had to take over her father’s care, and force him to go the hospital when he needed to, because he refused to go. That’s a common scenario with adult children and aging parents.

This is a rough time for the Hildebeest. As soon as she finishes shedding her skin, she will be just fine.

Her mom just lavished pneumonia on the grandkids and a random on the streets 90 minutes after vapor lock — clearly the demon needs more souls before the transference to Chelsea.

Saw a Youtube clip on Zerohedge where a doctor was skeptical about the pneumonia dehuydration cover story for her latest fall.. Dehydration on a day where she wasn’t sweating profusely and then falling, going to lay down for ninety minutes and then emerging all better.. If you are that sick from pneumonia you end up on your back for weeks… He speculated that she has Parkinsons judging from how many times she keeps falling and the fact that she could emerge ninety minutes later from the fall all better! She went to Chelsea’s and took her Parkinsons medication…

Remember when liberals used to make fun about Ronald Reagan’s sinility.. but now they cover p this?

If one goes to youtube and does a search with the words { Hillary health problems } you will come up with 116,000 results.. At this time.

They’ll fix that — Facebook routes around it, Twitter drops it from trending, ya think people are smart enough to run from social media yet?

Unimportant.. Assume that the Hildebeest has advanced Parkinson’s. Also assume that The Donald has known about her problem for some time.The pieces start to fit together, do they not ??
Already hearing that the hildebeest will skip the debates.Lets see what happens in the next 2 weeks.

If she was feeling fine and walking around without the harness 90 minutes after throwing a rod, why does she need days to recover, cancel Ellen, maybe the debates.

I think they’re going to chemically jack her up for brief public appearances then she’ll campaign as Hillary Headroom, your virtual nominee.

I’m not expecting to see any close ups as she powers through today.

This doctor sounds credible. He acknowledges that he can’t be certain without examining her directly, but his explanation is very plausible.

You have a good eye..I thought this one to be very good also. and I have looked at a lot of these.