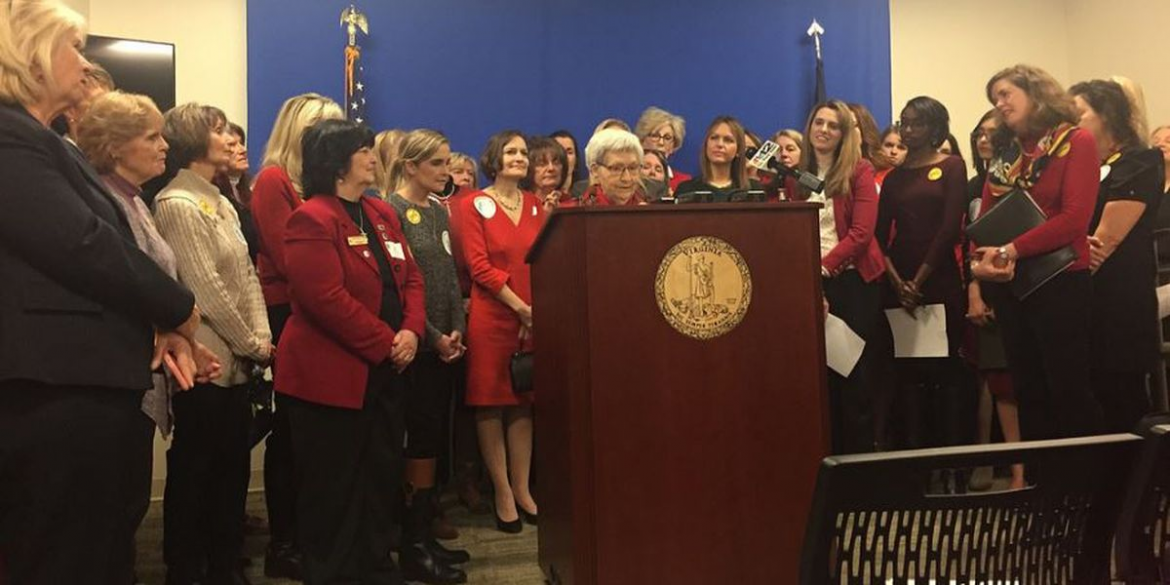 The Equal Rights Amendment Will Enshrine Abortion in the U.S. Constitution

written by Guest Contributor Kurt Posner January 14, 2019
Senator Jill Vogel has been leading the fight to pass a Constitutional Resolution that will ratify the Equal Rights Amendment.  The ERA is a left wing agenda that will effectively enshrine abortion in the constitution.   Unfortunately for Republicans, Senator Glen Sturtevant (R-Richmond) has teamed up with the Democrats and has authored the legislation.  Joining the ERA bill are two other Republican Senators Siobhan Dunnavant and Bill DeSteph.

Former Virginia Attorney General Ken Cuccinelli wrote a letter to every Virginia Delegate and Senator stating that “Passing the “Equal Rights Amendment” (ERA) will create new opportunities for abortion activists to use the courts to erode protections for women and their unborn babies and to forcibly expand access to state-funded abortion, including court-ordered public funding of abortion.  This has in fact already happened in various states that have passed state-level ERAs as part of their state constitutions.”

The ERA states very simply that  Equality of rights under the law shall not be denied or abridged by the United States or by any State on account of sex.

Senator Vogel has stated that she’s only doing this symbolically.  Unfortunately for her, the Democrats on Capitol Hill started celebrating a little early.  Democrat Congresswoman Carolyn Maloney stated that in the midst of bad news of a government shut down, there was still good news out of Virginia.  A Senate Committee had passed the ERA.

Her quote on Twitter:   “On the 1st day of the Virginia State Senate’s legislative session, a cmte passed a resolution saying the state should ratify the #ERAnow. A great step to making VA the 38th (& last needed) state to ratify the Equal Rights Amendment & enshrine women’s equality in the Constitution!”

Democrats on Capitol Hill are waiting for Virginia to ratify because they regard this as the 38th state to do so.  They see this as the only way to save Roe v Wade against a conservative Supreme Court.

Once again Republican voters have been betrayed by leaders in their own party.  The full Virginia Senate will be voting on this tomorrow.

Call Senators Jill Vogel, Glen Sturtevant, Siobhan Dunnavant and Bill DeSteph and urge them to vote no to Senate Joint Resolution 284.  We do not want to enshrine abortion into the constitution.


Ken Cuccinelli’s letter to Delegates and Senators in the General Assembly:
From the Desk of Honorable Kenneth T. “Ken” Cuccinelli II

Subj.: Undermining protections for unborn life and pregnant mothers via the ERA.

Passing the “Equal Rights Amendment” (ERA) will create new opportunities for abortion activists to use the courts to erode protections for women and their unborn babies and to forcibly expand access to state-funded abortion, including court-ordered public funding of abortion. This has in fact already happened in various states that have passed state-level ERAs as part of their state constitutions.

While numerous and well-reasoned predictions abound with respect to the impacts of ratifying the proposed “Equal Rights Amendment” (ERA) to the U.S. Constitution, there is at least one outcome of which we can be sure: If the General Assembly makes Virginia the 38th state to ratify the ERA, a flurry of litigation will immediately ensue over its legitimacy and effects. This would not only trigger a constitutional crisis, but would generate prime new circumstances for pro- abortion activists to expand their efforts to undermine any and every law designed to safeguard the lives and health of pregnant women and their unborn babies.

The General Assembly’s formal approval of the ERA would unquestionably open the door to judge shopping across all U.S. District Courts nationwide in a frenzied search for ideologically favored outcomes since the legal issue would affect every citizen. In a scenario of that kind, we should expect courts to eventually rule differently on the same questions of law, thus leading to widespread uncertainty about what is really part of the Constitution and/or what the ERA actually entails. Such volatility would likely linger for years as the various cases worked their way through the process of litigation and appeals. In the meantime, activists would doubtlessly take full advantage of the opportunity to use the courts to chip away at fundamental guarantees, including the conscience rights of all who oppose financing and participating in the taking of innocent human life through abortion.

Among the plausible consequences of ratifying the ERA, the Amendment will be argued to enshrine within the U.S. Constitution an unrestricted right to taxpayer-funded abortion. Though at present we can only speculate how the federal judiciary would apply the proposed federal ERA, numerous state court cases applying their state’s ERA-equivalents are particularly instructive on two levels. First, it is absolutely clear that if the ERA ever actually becomes part of the U.S. Constitution, there will assuredly be litigation to expand abortion and restrict protections for

pregnant women and their unborn babies based exclusively on the ERA, and second, the state- level experience suggests a high likelihood that such litigation will succeed.

The state of Connecticut adopted a provision in its state constitution very similar to the federal ERA on November 27, 1974. When plaintiffs challenged the constitutionality of a state law restricting the public funding of “medically necessary”1 abortions, the Superior Court of Connecticut held that the law violated “specifically Connecticut’s equal rights amendment.”2 The Court reasoned that, “Since only women become pregnant, discrimination against pregnancy by not funding abortion when it is medically necessary and when all other medical expenses are paid by the state for both men and women is sex oriented discrimination.”3 Upon reaching that determination, the court concluded that “At the very least, the standard for judicial review of sex classifications under our ERA is strict scrutiny. Surely the effect of the [passage of the] ERA was to raise the standard of review.”4

The ERA’s effect of heightening the standard of review for any distinctions made on the basis of sex deserves close attention. Discussing the proper standard of review in such instances, the Connecticut Superior Court drew attention to the state of Washington and how it interpreted its state’s ERA:

Some jurisdictions have interpreted their state ERA’s as requiring absolute scrutiny, that is, the court will not consider any justification for sex discrimination once it has been found. For example, the Supreme Court of Washington has held that “[t]he ERA, on the other hand, is a very different animal from the equal protection clause — indeed, it has no counterpart in the federal constitution. The ERA absolutely prohibits discrimination on the basis of sex and is not subject to even the narrow exceptions permitted under traditional ‘strict scrutiny.’ . . . The ERA mandates equality in the strongest of terms and absolutely prohibits the sacrifice of equality for any state interest, no matter how compelling. . . .” (Emphasis in original.)5

The state ERA cases in Connecticut and Washington demonstrate how federal courts could likewise interpret a federal ERA to prohibit any conditions in which women may receive disparate treatment from men, including when it comes to their right and ability to receive state-funded “medical procedures” (i.e. abortion) under Medicaid and other programs.

“[b]ased on the independent grounds provided by the Equal Rights Amendment to . . . our state constitution,” New Mexico could not differentiate between abortions and medically necessary procedures sought by men, and was therefore required to pay for elective abortions under Medicaid.6 Failing to acknowledge the naturally-occurring differences in the biological capacities of women and men, or that an abortion involves the intentional destruction of an independent and innocent human life, the Court concluded “there is no compelling justification for treating men and women differently with respect to their medical needs in this instance.”

It is worth noting that ERA proponents have consistently revealed abortion access to be an indispensable component of their initiative. When the state legislatures in Wisconsin and Minnesota, for example, attempted to pass a state version of the ERA, but one that contained a clause to make it abortion-neutral, the ERA supporters killed the bills.7 The same thing happened during federal debate on re-introduction of the ERA in 1983.8 Even during the original attempt to ratify the ERA, the connection between the ERA and abortion was clearly recognized. University of Notre Dame Law professor Charles E. Rice stated in 1975, “The potential effects of ERA on abortion are sufficient . . . to cause all those who oppose abortion to oppose the ERA.”9 Forty-four years later, the Amendment’s language has not changed.

Rather than inviting years of costly and contentious litigation that can only serve to undermine legal protections for unborn life and pregnant women, the General Assembly of Virginia should first consider whether there is a better, safer, and more targeted means of addressing or resolving any actual problem it perceives to exist within the Commonwealth. Amending the United States Constitution is an extraordinary political measure, as it is binding on all 50 states, and historically occurs only upon the demonstration of a substantial, pressing, and obvious national need. Consequently, it should not be done carelessly or without abundant justification. Yet proponents of the ERA mostly emphasize the “symbolic” importance that it

6 N.M. Right to Choose/Naral, Abortion & Reprod. Health Servs., Planned Parenthood of the Rio Grande v. Johnson, 126 N.M. 788, 791-792, 1999-NMSC-005, 2, 975 P.2d 841, 844-845, 1998 N.M. LEXIS 466, *4, 38 N.M. St. B. Bull. 6 7 https://concernedwomen.org/images/content/MoreEvidencAgainstERA.pdf 8 When the ERA was reintroduced into the U.S. House of Representatives in 1983 it had the exact same wording as that being considered by the Virginia General Assembly. During the House of Representatives hearing, Congressman James Sensenbrenner (R-WI) cited the legal analysis from the Library of Congress’ American Law Division on the impact of the proposed ERA on the legality of abortion and the Hyde Amendment’s prohibition on using federal tax money to fund abortions: “… the conclusion indicated that sex [would be considered] a suspect classification and the Hyde amendment would be overturned under strict scrutiny by the United States Supreme Court,” Sensenbrenner said. That of course would result in publicly funded abortion that does not exist today.

would have for women, even while blocking any and all attempts at both the state and federal levels to make the ERA abortion-neutral.

Finally, I must note an element of the discussion that I have not addressed and that has no 1972-era analogy, but that will inevitably be part of the litigation explosion should the ERA be made part of the U.S. Constitution, and that is the very definition of the word “sex” in 2019 as opposed to the understanding in 1972. In 1972, “sex” was understood to refer to biological gender, i.e., men and women, where men are those human beings born with XY chromosomes and women are those human beings born with XX chromosomes. The fact that the foregoing sentence is now legally and politically controversial is indicative of an entire swath of litigation separate from abortion that will be carried on based on the ERA if it becomes part of the U.S. Constitution.

[…] for opposing the ERA haven’t changed much.  They still amount to “but this would mean qualified women could attempt to take on […]