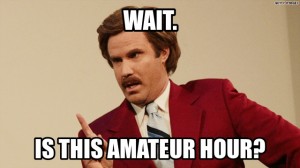 Poor Rob Wasinger. Running for Congress is HARD! There are so many things to have to try to get right, like campaign finance filings, hiring staff who aren’t unhinged lunatics, sending out competent emails, and so forth. Sometimes, it appears the little guy is just overwhelmed by it all.

But now we know Wasinger can’t even get his voter registration right. We knew he ran for Congress in 2010 in his home state of Kansas, and that he would have had to interrupt his Virginia voter registration to do that. Problem is, he doesn’t seem to have interrupted his Kansas registration to run here in Virginia. As one of his hometown Kansas newspapers reported yesterday:

The News was not able to verify with authorities in Virginia if Wasinger was a registered voter in Fairfax County, Va., where he lives and is seeking the 10th Congressional District seat. State law prevents such disclosure by long distance, although records can be inspected in the office in Virginia, according to Fairfax County General Registrar Cameron Quinn.

Kansas Secretary of State Kris Kobach’s office confirmed, though, Wasinger is registered in both Chase County in Kansas and in Virginia.

Wasinger registered in Ellis County in 2008, according to Reno County’s Deputy Election Officer Jenna Fager, and shifted his registration to Chase County in 2009. He lost the August 2010 GOP primary to Tim Huelskamp. The last ballot Wasinger cast in Kansas was in April 2011.

In 2012, he registered in Virginia, according to Kay Curtis, director of public affairs for Kobach.

Sheesh!! Why does Wasinger even think he’s got a chance here? Why is he wasting the voters’ time when he cannot even get the very basics of running for office right?

As we’ve said before, this guy has no business representing Virginia in Congress.

I must let you all know about my profound dissapointment when I found out our “boy from Kansas” actually did not show up at today’s Fairfax County Convention! I was looking forward to give him an earful, but he was missing in action…Darn!

Wasinger is probably the biggest joke candidate since Reuben Askew. It is hard to imagine a more pathetic figure in American politics today than the moron Wasinger who appears to possess the intelligence of Jimmy Carter and the charm of Gerry Connolly.

The clown, joke and moron Wasinger is wasting our time and money.

Wow! At least the party made money on his filing fee. I’m thinking he’s confused about which party he belongs to. After all, aren’t Democrats the ones that are registered to vote in multiple locations, violating the law? Just saying…